WEWS NewsChannel 5 posted a video on Youtube of Layzie Bone and Flesh-N-Bone stopping by a President Obama field office to encourage people to get out and vote this November. You can watch the news segment below:

Bone Thugs-N-Harmony are back on tour after their recent Rock the Bells appearance! Be sure to spread the word and be on the look out for added cities! 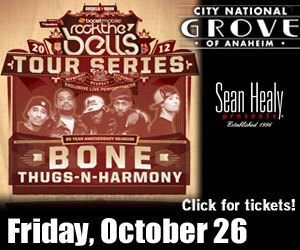 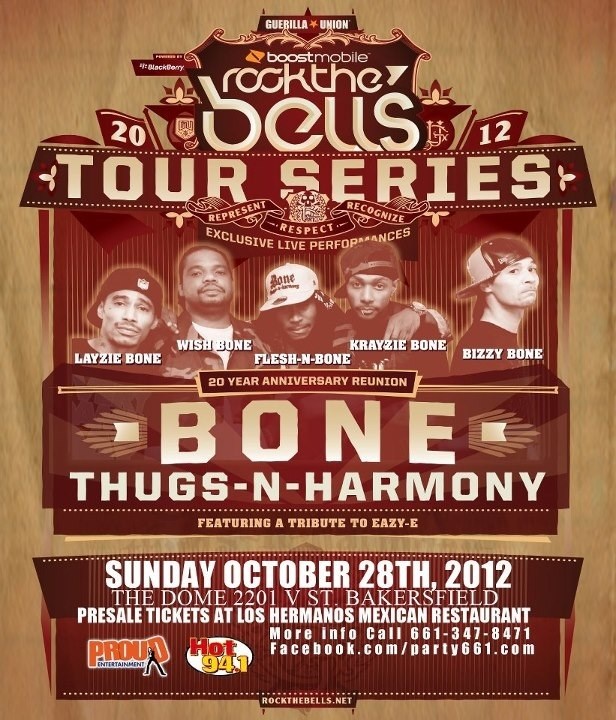 The other interesting bit of information posted in the article indicates that Bone Thugs-N-Harmony is eligible to join the Rock and Roll Hall of Fame in 2019.

CLEVELAND, Ohio — In 2019 — 25 years after their first album — Bone Thugs-N-Harmony will be eligible for the Rock and Roll Hall of Fame. It’s a concept that pretty much blows away Flesh-N-Bone of the Grammy-winning Cleveland-born rap group. But Flesh — real name Stanley Howse — is ready for the challenge.

“I’m gearing up for that right now,” said Flesh, laughing, in a call from a solo tour stop in Indiana in mid-September. “In 1994, [then-Mayor] Michael White declared Oct. 30 official Bone Thugs-N-Harmony Day. We’re hoping we can do something special for the city of Cleveland [by making the Rock Hall].”

Flesh and his four bandmates — Layzie Bone, Wish Bone, Krayzie Bone and Bizzy Bone; real names Steve Howse, Charles Scruggs, Anthony Henderson and Bryon Anthony McCane II, respectively — take another step toward possible enshrinement Saturday with a 20th-anniversary gig at the Agora. It’s not, as some might think, a one-time gig, either. All five original members will be on the stage.

“It’s a full-blown, Bone-is-back type of deal,” Flesh said. “We just did the ‘Rock the Bells Tour’ and we’re trying to use this momentum to take this to the next level.”

The issue, said Flesh, is that it’s not really a reunion or comeback. Bone has always been together, despite Flesh’s eight-year prison stay in California for threatening a man with an AK-47 assault rifle and despite the announced “departures” of Krayzie and Wish two years ago.

“We’re on one period, we’re off one period,” Flesh said. “From the outside looking in, the group’s in disarray.

“Right now, Wish and Krayzie, they’re by themselves in Australia. When they get back, we’re going to do what we need to do. Right now, I’m in Indiana doing a solo show, but that does not mean that we’re not together,” he said.

It’s easy to see how others could perceive the band as “the former band.” Flesh and Layzie live in Los Angeles. Bizzy spends time between Los Angeles and Columbus. Krayzie has a house in Aurora and another in Miami. Wish pretty much stays in Cleveland.

“They got houses in the ‘burbs,” said James Norton, who grew up with the guys in their St. Clair neighborhood and now works with the two siblings in Bone — Flesh and Layzie — as an executive with Flesh Bone Global group. “Everybody wants to improve their living situation. [In the ghetto] you might know everybody, but there’s still that hard criminal element, so you get your house outside the city so you can relax and put your family [in a safe place].”

There have been rifts and splits. Some have resulted in the vocal quintet at times falling off the mainstream hip-hop radar. But the group signed to Ruthless Records by N.W.A.’s Eazy-E in 1993 continues a history of creating and re-creating itself. Sometimes, those separations are necessary.

Flesh insists he and his bandmates are as relevant today as they were when “Tha Crossroads” won the best rap performance by a duo or group Grammy in 1997. Fittingly, that song, delivered in Bone’s ground-breaking mix of staccato rap over melodic harmonies, was a tribute to their mentor, Eazy E, who died of AIDS in 1995.

“It’s not about changing or evolving,” Flesh said. “We’ve matured as adults. We have children. I’m an artist and I’m a businessman. I ain’t got time to fool around.

“When I’m in the studio, it’s top-notch,” Flesh said. “I create my own lane with no gimmicks, no remakes. It’s clear-cut and creative. That’s how an artist maintains longevity.”

Bone has maintained that longevity better than anyone in hip-hop, save for Snoop Dogg and Ice Cube.

“I just did a show with 70,000 people in attendance,” he said. “I’m relevant. We created a lane, we created a style. We gave hip-hop a face-lift. We changed the whole structure of the game.”

The band’s Wikipedia page notes that about.com has ranked Bone at No. 12 out of the top 25 rap groups in the history of the genre, and MTV has tagged them “the most melodic hip-hop group of all time.”

“Our first musical influences were our parents,” Flesh said. “I was brought up in households where they’d doo-wop. We got our harmonies from our moms, our aunties and our uncles. They’d sit around the table singing, and we’d join in there and sing.”

The sounds of Marvin Gaye and Smokey Robinson can still be heard if you listen closely to Bone’s music. The trademark Bone flow, said childhood friend Norton, wasn’t so much created as evolved.

“It was something they picked up from different rap styles coming out, like D.O.C. and even some old singing like Marvin Gaye,” said Norton. “Curtis Mayfield had a high harmony almost like he was speaking, and I believe it was more Layzie and Krayzie who developed this rapid spitfire sound. It always started with a slow beat, because of all the R&B they listened to.”

Bone’s music is a kind of gangsta variation of that, with references to sex, with a proliferation of profanity and the N-word.

To some, that is offensive, and it’s easy to understand that point of view. But it’s also a reflection of just who Flesh, Bizzy, Krayzie, Wish and Layzie are: black men who grew up in the projects of Cleveland.

“In your audience, you’ve got some people who are sensitive to certain things,” said Norton. “The unfortunate truth is that these are things these same people see in front of their own eyes daily, in real and raw form.

“The people who get caught up in the words and think it’s negative, if they really pay attention, the message is real, the message is truth,” Norton said. “They’re speaking honestly and from their hearts.”

“Every time I go to Cleveland, I’m St. Clair-bound,” said Flesh, who now lives in Los Angeles. “I’m the type of cat, I go where I want to go. I’ve got family from St. Clair, Superior, Cedar, the 105, Hough. I was born in these streets, and I always go back to pay homage.

“You want to talk projects? Longwood, Central,” he said. “I always touch these places all the time. My old street, Remington, I go back there.”

And yet, as much as Bone is a product of the projects, the band’s music belongs to a wider ethnic and economic base. It’s true today, and it was true in Bone’s heyday.

“I wish I really understood the nature of that,” Flesh said. “Why do we appeal to such a wide base and demographic?”

It comes, Flesh said after some thought, because of the songs as much as the delivery.

“We have songs with universal content,” he said. “Everybody can relate to these songs, everybody goes to work, hustling in any capacity, can relate to the first of the month, to the love of money. All the races love us.”

Norton agreed but said the wide acceptance by all races did come as a bit of a surprise.

“The devil doesn’t focus on your race or gender,” he said. “Drugs affect every community. Same with death, assault, robbery. That happens to everybody.”

Bone may not initially have been aware of the universality of all that early in the band’s career, but over time, the members have realized that “it’s not unique to us. It’s global,” Norton said.

But Bone isn’t ready to rest on its laurels, not at a time when hip-hop needs the band as much as the genre ever did.

“You can call [rap] watered down to a degree,” Flesh opined. “It’s not as [socially] conscious as it used to be. It’s more about the jerkin’ and jerk dances and all this other stuff. That’s why we’re here, to bring it back.

More songs like “Tha Crossroads,” a deeply introspective tune about crossing over from this world to the next, are what’s needed, he said. There are artists — Lil Wayne, Jay-Z, others — who are doing good work. But Flesh is convinced that rap needs Bone more than Bone needs rap.

“We will forever be relevant,” he said. “I could retire here and be happy, but we’ve still got a lot of hard work to do. A lot of this music is meaningless gibberish put up under a beat. That’s not what our communities need. Our communities need a real expression of art.”

Besides, it’ll sound good at the 2019 Rock Hall induction concert.

Bone Thugs-N-Harmony will be heading to Garden City, ID on November 30 December 1. Check the article for more details, including a performance tribute to Eazy-E. 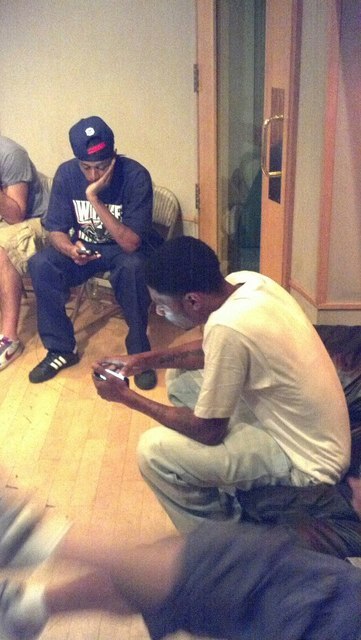 Layzie and Krayzie writing their verses. Flesh and Bizzy are in the other room writing.

Shortly before their set at Rock the Bells’ San Francisco Bay area on Sunday night, Bone Thugs-N-Harmony told AllHipHop.com they were appreciative of Game’s new single “Celebration,” which features Wiz Khalifa and Lil Wayne and samples both Bone’s music and stylings.

“I feel like any song that we do that someone remixes we may have looked at as being disrespectful back when we were young and getting in the game,” Wish Bone said from the tour stop in Mountain View, California. “But us being in the game for 20 years and younger cats coming up behind us doing our style, a style that we invented, that’s kind of a compliment.”

Ironically, when asked whether the longtime rumors that Eazy-E was so impressed with Leimert Park’s Freestyle Fellowship’s style that he signed Bone to essentially copy their recipe and go mainstream, Bizzy Bone was quick to explain that wasn’t the case.

“No BS aside, I’ve heard the same thing, but I think it was the vibe, the Midwest vibe,” Bizzy Bone said. “Twista was around, [the Freestyle Fellowship] was around. Actually Layzie Bone was the first one to come up with it [from our camp]. If you go back to Faces of Death, in ’91-’92, that documents that we were there. Everything is from the heart, everything is original and sometimes when you gather a great idea, a lot of people are a part of it.”

Bizzy Bone further applauded Game, as well. “I kind look at it how like my brothers look at it with the remix that my brother Game and them did,” Bizzy Bone said. “We not bitter at anything, no matter what … thank you for the homage.”

As far as their slot on this year’s Rock the Bells co-headlining the second day of the two-day show with Nas, Flesh N Bone emphasized that the experience was a treat for the fans.

Back by DJ Quik’s band, the veteran group from Cleveland, Ohio, are “representing as general and veterans in the game,” Flesh N Bone said. “We’ve got a lot of history, a lot of expertise when it comes to performing, whether with a DJ or a live band. You can’t download a live performance – you have to experience it.”

Rock the Bells travels to New Jersey this weekend to conclude the third and final installment of the annual summer concert series this year.

A fourth, more scaled-back Rock the Bells, will take place in Miami in December.