The FOX 8 I-TEAM spoke to both Bizzy Bone and Krayzie Bone about the Japanese rapper, Ryo Muranaka, stranded in Cleveland. BTNHLegacy first learned of Muranaka’s journey yesterday from one of the two men who helped him get off the streets, James Norton. Norton confirmed with BTNHLegacy that Muranaka first arrived in Cleveland on June 22, 2019.

The Japanese rapper reportedly sold everything he owned so he could afford a one-way plane ticket to Cleveland, in hopes of meeting, signing, and performing with the multi-platinum rap group. He was found by activists on the street, broke, and robbed of his luggage. With resources and time running out, activists turned to FOX 8 I-TEAM for help.

From there, they reached out to people tied to the group, lawyers, and lawmakers, in hopes of providing some form of help. His temporary stay in this country has expired, and as a result, could be detained and deported at any time. Now he can afford to go back home.

Krayzie also mentioned that family from Cleveland called to tell him about this man’s journey, reflecting on his own journey with the other Bone Thugs-N-Harmony members.

Krayzie Bone said to Fox 8, “When we left Cleveland, we just got on a bus and got one-way tickets to Los Angeles. He took it to a whole ‘nother level. He left an entire country.”

Still, the members of Bone Thugs-N-Harmony say they would like to see the man back in the United States someday so that they can sit down with him and hear his music.

FOX 8 learned that Layzie Bone did provide a hotel room for some time. James Norton continues to talk to him everyday. 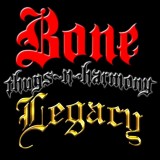 Silent Killa is one of the founders of BTNHLegacy.com, along with Hades, JeremyMT, OD210, OG Rise84, and OutSider.