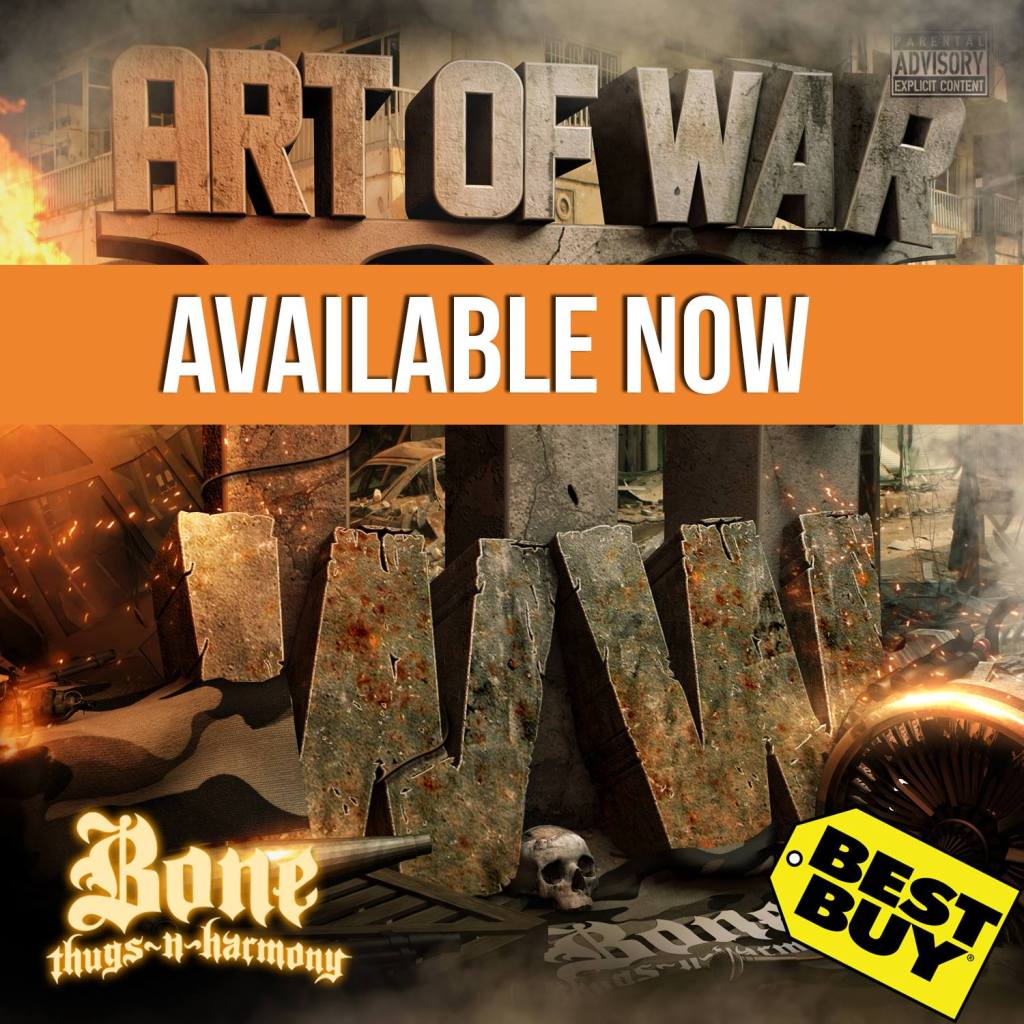 END_OF_DOCUMENT_TOKEN_TO_BE_REPLACED

Bone Thugs-N-Harmony sit down with TheSource.com’s Emily Berkey to denounce their alleged album, Art of War 3 and clear up rumors about the supposed tracklisting.

After a brief break in their day filled with meet and greets and sound check, all five of the thugs, decked out in Bone Thugs-n-Harmony gear, leave their Downtown Seattle hotel and head to their first show of two for the night. Wanting to give back to all of their fans, they’ve added another show after the first one sold out so quickly. As Will.i.am and Britney blast over the radio in their crowded Explorer, the men talk about how they’re going to pace themselves for the night. Bottles of Hennesy will not be opened until after their first show, and Redbull will be necessary. The men are concerned with giving their fans the best shows the can. Even if this means the men of Bone Thugs won’t be able to indulge.

They’ve slipped away to the green room. A windowless room filled with Redbull and bottled water. The room is slowly filling with cigarette smoke as dispensary owners show the thugs their latest goods. Somehow, fans, male and female alike, have slipped backstage and are standing around, watching the men of Bone Thugs-N-Harmony in awe. The humble five-some welcome these strangers with open arms, and sign gear for them. The five never turn a cold shoulder to their supporters, or speak a harsh word to thirsty females. “Some of these women want attention, some of them just want to have fun”, states Sloan Bone.

As eyes lower and the crowd upstairs gets louder, the men join together in prayer, circled up, hands in the center, led by Flesh, who encourages his daughter and her mother to join in. The first show of the night lasts over an hour and a half. The thugs provide what feels like an intimate show to a sold out Seattle crowd.

The first show ends and the thugs go their separate ways. Flesh leaves in a taxi while the other four leave in the Expedition driven by their manager, Jamie Adler. The hotel is their destination. An hour of rest is all they get before their next and final show on the Northwest leg of their 20th Anniversary Tour. As Bone Thugs-N-Harmony’s 18 hour day filled with a meet and greet, sound check, and two shows finally comes to a close, we’re able to sit down with all five of the Bone Thugs for an interview.

Check in with The Source over the next five days to hear what they had to say.

You’ve been working on your newest album, Art of War 3?

Flesh-N-Bone: No, no, objection!

Layzie Bone: Let me clear that up, cause there’s been a misconception. We were dealing with a company that me, Bizzy, and Flesh was working on the album with and they put it on the internet saying that they had a five man Bone Thugs-N-Harmony album called Art of War 3 and that’s totally not true. What we’re working on is the 20 Year Anniversary project, which is a project that we’ll all do together. Brand new music, over the years.

Bizzy Bone: …We just gotta get those things out of the way because it’s absolutely not true and we wanna make sure that it’s known clearly and not speak too much on it and give it too much hyphy because it ain’t a finished project, it’s just some damn snatch and grabs off the goddamn internet, it ain’t professional, it ain’t where it needs to be, if they do have anything it’s gonna be on some smash and grab.

So the track list that’s out right now, those aren’t your tracks?

Bizzy Bone: It’s smash and grab. It’s going on the internet and snatching up different songs

So are the rumors true that you’re gonna have Kendrick on the album?

Layzie Bone: That’d be nice, but we haven’t done nothing with him.

Bizzy Bone: You mean the 20th Anniversary album? That’s up to Kray. He [Krayzie] is like the mastermind behind most of the record to give us a good jumpstart, and we all get to put in our two and ten cents after he gets the groundwork in. We have some organization, and we’re not running around crazy, we have organization we’re not five wild niggas running around, all willy nilly you understand? We’re grown men, have been in the business for 20 years, we know a little somethin’ somethin’. We know how to step back and let a company do what it does and let a CEO do what it does and let us as artists do what we do. That’s where our minds are right now. So we really want to get that across to The Source this evening.

Krayzie, they’re telling me that you’re in charge of the framework of this album. What do you expect it to be like?

Krayzie Bone: The vision that I see is just us being simple. Just solidifying who we are and what we’ve done. It’s like a celebration us being in the game for 20 years. What other group has been around that long? All of the members are still alive and healthy. Plus what we’ve done is we’ve changed the game so much, it’s like this whole game has spawned from what we’ve done. We are looking to have a double CD. The first CD will be Bone Thugs, giving our fans the original Bone sound, what they want to hear. The second CD we’re looking to have as many guest appearances as we possibly can.

So you could possibly put Kendrick on a track?

Krayzie Bone: We’re looking to get the newest, most current to the old school. We’re trying to get everyone to come out and celebrate us being alive and keeping in the game for 20 years. Whoever we can get to get down with us and celebrate with us is welcome.

This is part one in a five part series. Check back over the next few days for more of our exclusive interview with all five members of Bone Thugs-N-Harmony