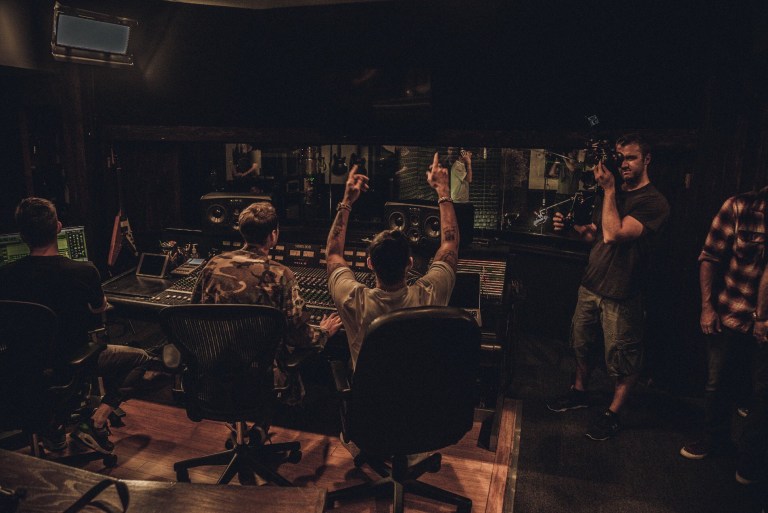 The Bizzy Bone appearance on Oprah’s “Where Are They Now?” is set to air on December 10 on The Oprah Winfrey Network at 10PM ET/PT 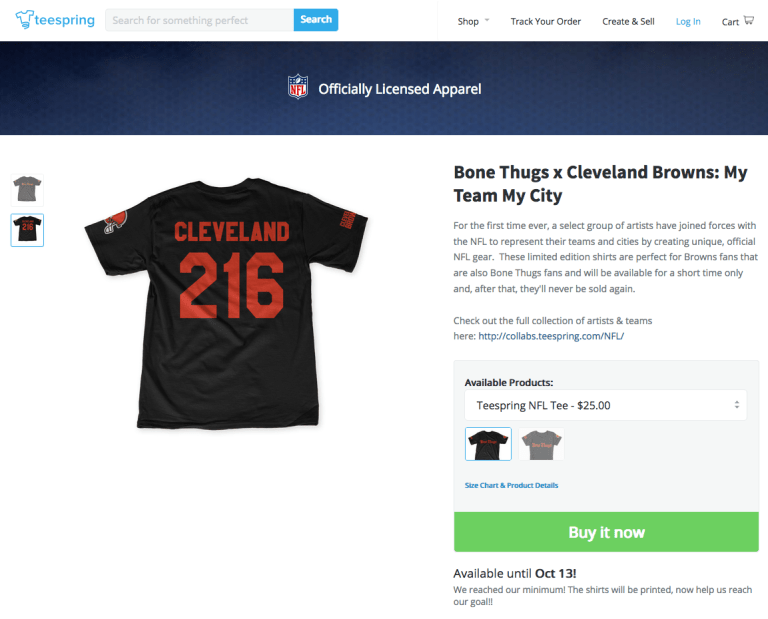 For the first time ever, a select group of artists have joined forces with the NFL to represent their teams and cities by creating unique, official NFL gear. These limited edition shirts are perfect for Browns fans that are also Bone Thugs fans and will be available for a short time only and, after that, they’ll never be sold again.

Head over to http://teespring.com/BT_NFL to order yours today.

END_OF_DOCUMENT_TOKEN_TO_BE_REPLACED

Bone Thugs-N-Harmony will be performing at Krush Groove, presented by 93.5 KDAY-FM Los Angeles at The Forum in Inglewood, CA on April 18. All 5 members are expected to appear to celebrate the 20th anniversary of E. 1999 Eternal. Check the flyer for ticket information. 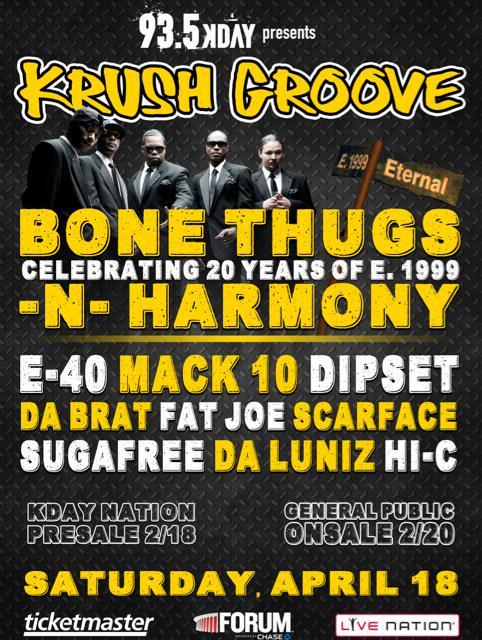 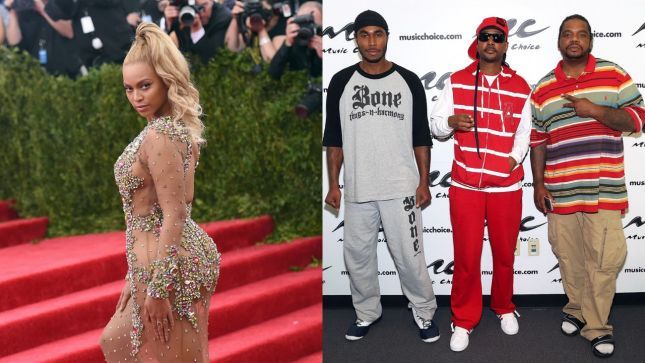 Beyonce is busy recording her sixth studio album, and she’s apparently switching up her sound this time around.

Sources tell The Sun, the Grammy-winning entertainer has put plans to record a joint album with her hubby Jay Z on hold, and instead is focusing on a solo album that will feature a “distinctly more urban sound.” Whatever the hell that means.

”[Beyonce] worked on [her new album] with the likes of Bone Thugs-N-Harmony. Plans for an album with Jay Z are now on the back burner,” shared one source.

(AllHipHop News) One of the most powerful moments in the Straight Outta Compton movie was the scene where Eazy-E found out he had AIDS. The N.W.A member later passed from complications of the disease. One of Eazy’s chart topping Ruthless Records acts still does not believe their former boss died from acquired immune deficiency syndrome.

Bone Thugs-N-Harmony sat down with VladTV to talk about their history with Eazy. Krayzie Bone, Wish Bone, and Flesh-n-Bone also discussed the death of their mentor. They were asked if they agreed with Eazy’s son that AIDS was not the cause of the rap legend passing away.

“Me personally, I do as well,” said Wish. “Even to this day, none of his kids, none of his baby mammas, his mistresses – nobody has come up with HIV. Just rationally thinking, something had to go on.”

Krayzie adds, “I know people can live with HIV for years and look healthy, but when you’re about to die from full-blown AIDS, you’re gonna look like you’re gonna die from AIDS… Eazy didn’t look like that at all.”

Bone Thugs-N-Harmony – just one of the many rap performers appearing at this weekend’s ‘Art Of Rap Music Festival’ in Irvine. In 1997, the group won a Grammy for the hit ‘Tha Crossroads’.

Graced with a quick and sometimes sung delivery, along with a unique sense of melody, Bone Thugs-N-Harmony burst out of Cleveland, Ohio in the mid-’90s with a pair of massive hits (“Thuggish Ruggish Bone” and “Tha Crossroads”) along with a great first album, as well as a successful follow-up, and then quickly unraveled. Mainstream interest dropped off toward the tail end of the ’90s, but the group, which underwent a series of lineup changes, continued to release new material via mixtapes and albums throughout the 2000s.

N.W.A’s Eazy-E signed the group — initially comprised of Krayzie Bone, Wish Bone, Flesh-N-Bone, Layzie Bone, and Bizzy Bone — to Ruthless Records. The debut release from Bone was an EP, Creepin on ah Come Up (1994). The EP boasted “Thuggish Ruggish Bone,” a conventional G-funk song with an unconventional array of Bone Thug rappers that became an overnight summer anthem, especially throughout the Midwest. The single crossed into the Billboard Hot 100, where it peaked at number 22.

Amid the fervor, the group immediately reentered the studio and emerged with a remarkable album, E 1999 Eternal (1995). The album topped the Billboard 200 and the Top R&B/Hip-Hop Albums charts and spawned a pair of popular singles, “1st of the Month” and “Tha Crossroads,” the latter a dedication to the deceased Eazy-E and a Grammy Award recipient. As was in vogue at the time, the group members subsequently pursued respective solo careers and also a Mo Thugs Family spinoff group; none of these ventures rivaled the proper Bone projects.

At this point, the onetime cohesive group, which specialized in interwoven, harmonious singing as well as rapping, became conflicted and the group members failed to collaborate well. However, their second album, Art of War (1997) — an ambitious double-disc package — was very successful. Not only did it top the same Billboard charts as E 1999 Eternal, but lead single “Look into My Eyes” went Top Five on the Hot 100. Within a year of release, it was certified quadruple platinum for over four million units sold in the U.S.

A second round of solo albums sold poorly, and Bone quickly slid off the mainstream radar. Occasional reunions, such as 2000’s BTNHResurrection and 2002’s Thug World Order, produced some moments of glory, but these were few and far between. Thug Stories, released in 2006 on Koch, placed the group — at the time, a trio minus Bizzy — in the Top 30 of the Billboard 200. Bone then signed to Swizz Beatz’s Interscope-affiliated Full Surface boutique label, where they issued 2007’s Strength & Loyalty. A major-label budget allowed for guest spots from the Game, Mariah Carey, Akon, Bow Wow, and Twista, and the set eventually sold over 500,000 copies, earning gold certification. Bizzy returned for 2010’s Uni5: The World’s Enemy. The album debuted at number 14 on the Billboard 200. A handful of dates excepted, Bizzy was absent from the album’s promotional tour. He returned for the 2013 release Art of War: WWIII, but this time Krayzie and Wish Bone were out of the group, with both working on solo careers.

The Art Of Rap will feature two stages and over 25 artists per date featuring a who’s who of the history of rap & hip-hop. The events will be a full festival experience featuring break-dancers, live graffiti artists, vendors, an interactive festival area and so much more.

A select amount of tickets are available on the official website: http://www.ArtofRapFest.com

Check out the new video for More Than Thugs from the upcoming Damizza album entitled Damizza Presents. Let us know what you think of it!
Bone, Bone, Bone, Bone!