Since embarking on a solo career, Krayzie Bone has blessed the world with dozens of albums, mixtapes and memorable features. The Bone Thugs-n-Harmony frontman recently sat down with DJ Vlad to discuss both his current and upcoming projects, which notably includes Chasing the Devil, Krayzie Bone’s first studio album in ten years. Aside from focusing on his own career, Bone also develops several artists and is looking to get his music business-related show picked up by a major network.

In the end, Krayzie Bone said it’s the love for music that has kept him in the game since the early 90s. “‘Cause if I didn’t have that I [would’ve] been left all of this alone,” he stated. Watch above.

Chasing the Devil is now available on iTunes and Google Play.

“Every rapper that competed they joined the team, because they know they could never beat me,” raps Krayzie Bone. A HipHopDX premiere.

Krayzie Bone’s long-awaited solo album, Chasing The Devil is almost here. By all accounts, this is his most complete project since Thug Mentality. His latest release, “Like Fire” is quintessential Bone Thugs melodic relentlessness. This one rides.

Chasing The Devil, which is being released by Krayzie Bone Media / RBC Records, is currently available for preorder. The November 20 street date is set. “Like Fire,” is the official second single and brought to you by HipHopDX

Krayzie Bone will be releasing his final album “Chasing the Devil: Temptation” this Friday November 20th. Along with it comes a new website counting down the days to its release. This album will be a three disc set with three different release dates. Krayzie Bone recently released the first single off the album, Cloudy, and has since released a video to go with it. Check out the video below and also be sure to check out the “Chasing the Devil” website countdown at www.IamKrayzieBone.com

“Chasing The Devil” rises on November 20. Until then, sink into the first single. A HipHopDX Premiere!

It seems like Krayzie Bone has been curating Chasing The Devil since Obama’s first term. While it may not actually have been that long, diehard Bone Thugs-N-Harmony fans haven’t stopped clamoring since Leatherface first mentioned the project. And for good reason. Since making his introduction into Hip Hop as part of the seminal collective, Krayzie has remained by far BTNH’s most consistent emcee. He’s never put the mic down, never rested on his success, never lost sight of what’s most important in his life. His reward? A rabid audience fiending for what is being billed as the rap legend’s final series.

“I am very confident that once it is finally released on the new street date, it will definitely be worth the wait,” Krayzie says via press release. “I can honestly say that I haven’t felt this complete about a solo album of mine since Thug Mentality.” Weighty words from a Wasteland Warrior.

Chasing The Devil, which is being released by Krayzie Bone Media / RBC Records, is currently available for preorder. The November 20 street date is set. “Cloudy,” the official first single is finally here and brought to you by HipHopDX. 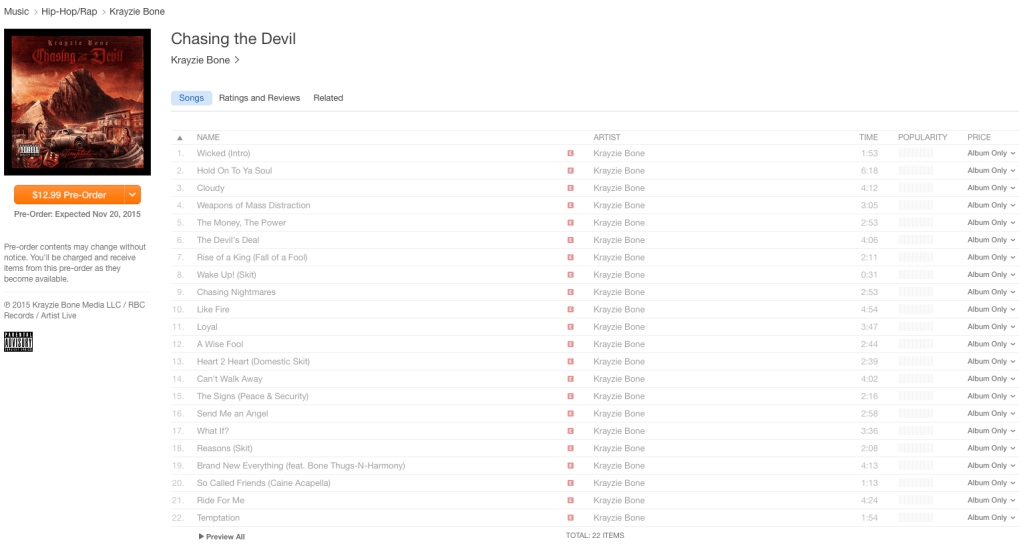 You can now pre-order Krayzie Bone’s upcoming album, “Chasing The Devil” on iTunes. Release date is set for November 20, 2015, and features Bone Thugs-N-Harmony.

Here is the tracklist:

With Chasing the Devil getting closer to its release, looks like Krayzie Bone and Krayzie Bone Media are looking at promoting it with this clip. Is it a full length movie or just a mini episode type of thing? Guess we’ll all find out at the same time!

Krayzie Bone says the “Chasing The Devil” album trilogy will be his last solo release.

Krayzie Bone has announced July 22 as the release date for the first of his three-part Chasing the Devil series.

You can read more on what Krayzie has to say here http://www.hiphopdx.com/index/news/id.28375/title.krayzie-bone-announces-chasing-the-devil-release-date

AllHipHop.com published an interview with Krayzie Bone this morning.

In the interview, he clarifies his recent announcement regarding the release of his upcoming solo album, Chasing The Devil, and talks about the group’s current state, heading into Rock The Bells, and Bone Thugs-N-Harmony’s 20th anniversary of being in the business next year.

You can read the entire interview here: http://allhiphop.com/2012/07/23/krayzie-bone-chasing-the-devil/